The Rottnest Channel Swim was full of action this year with a Great White Shark sighting, a sinking boat and flares going off! 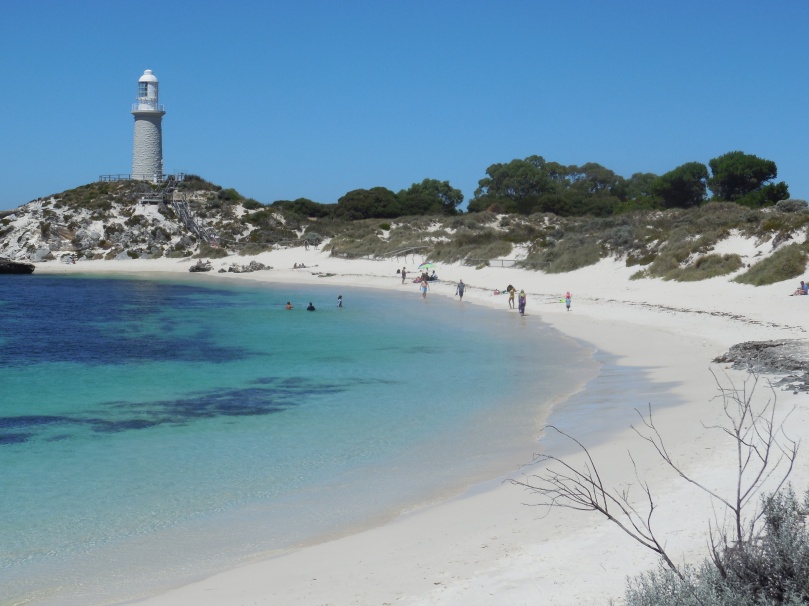 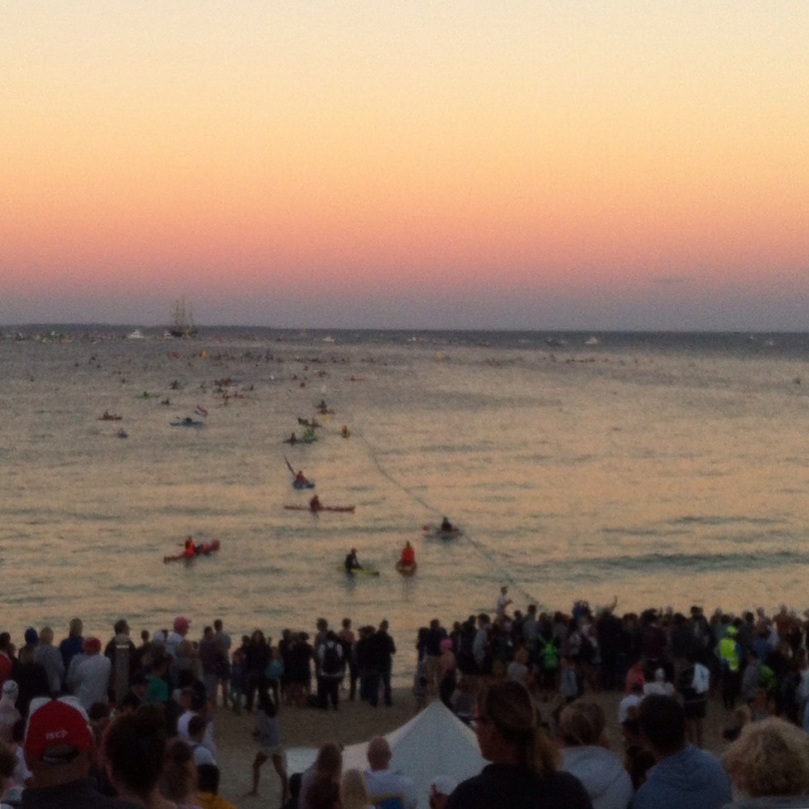 Swim to Rotto is one of Western Australia’s iconic events, the Rottnest Channel Swim is a 19.7km open water swim from Cottesloe Beach to Rottnest Island. The race can be done as a solo, duo or in a team of four and you need to have a support crew including a boat and a paddler.

The Rottnest Channel Swim is an event that I have competed in many times. However this year I hung up the goggles and took on a different role. I was the paddler, guiding the swimmers over to the island safely.

Cottesloe beach was crowded with spectators and nervous competitors! Ten minutes prior to the start I launched the kayak from the beach and headed out to the first buoy. It was where I had planned to meet Monique, the first swimmer.

There was a strong wind pushing me towards Rottnest Island and it was hard to position myself on the buoy. If I stopped paddling I was pushed out of position. We tried to make it as easy as possible to spot each other with a helium balloon but it was dragging in the water and the wind was wrapping the string around my paddle.

I was keeping a sharp eye out for my swimmer but they were all wearing yellow caps and looked the same. Finally, I located Monique and we were heading towards the island. Now all I had to do was find our boat!

I reached into my waterproof pouch and pulled out my walkie-talkie but as I pushed the button to talk the screen went blank. I had no communication between myself and the boat.

All I could do is keep an eye out for them and hope they spot me. If we had not found each other before the 1500m mark where the Leeuwin sailboat is situated we had to wait and not go past this point. Thankfully our boat found us prior the Leeuwin and we changed over swimmers. 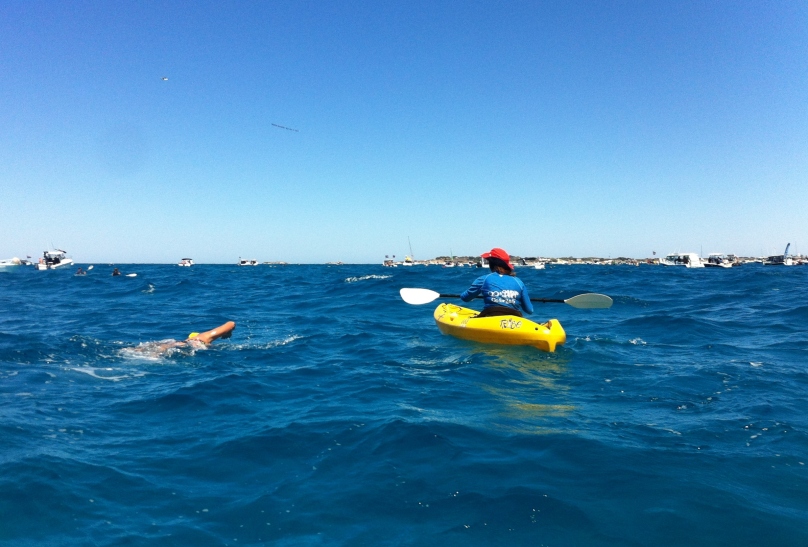 Our team was made up of three 16-year-old girls and one of their mums. At the start, the wind was pushing us off course and I constantly had to keep us in a straight line.

Then the swell picked up and the girls could just about body surf the whole way! I spent more time paddling backwards to stay in line with the girls as the waves and wind were pushing me out in front.

A sea rescue boat is in front of me advising to keep swimmers out of an oil slick as there is a sinking boat! As I guide them north I can see the hull of a boat bobbing out of the water. I later find out that the boat belongs to a friends brother and they are devastated which is understandable.

Around the 12.5km mark nature calls so I signalled for back up and changed paddlers. I wasn’t in the boat for long before I hear a call over the radio “A high-risk shark has been spotted in the area, all swimmers within 1 kilometre radius of the 12 kilometre marker must leave the water”

We were only a few hundred metres short of the 13 kilometre marker, we were almost out of the danger zone so we pushed on.

Turns out there was a 3-4 metre Great White Shark in the fleet. This is the first time in the history of the race that they advised competitors to evacuate the water and return to the mainland or Rottnest Island. Around 100 swimmers were affected and had to leave the water. The official radio channel was flat out with people advising their race number, that all competitors were out of the water and they were leaving the swim.

There was a bit of nervous tension with one of our young swimmers which is understandable. I think I would be slightly nervous knowing there is a shark in the area. One of the girls missed a few turns of swimming but once the water became clearer and shallower she gained her confidence and was back swimming.

Our team crossed the finish line is 6 hours and 8 minutes! 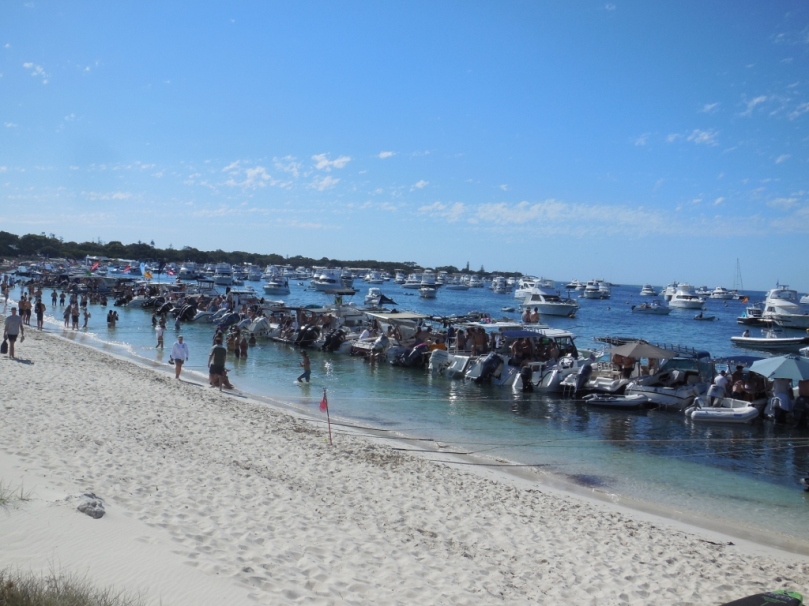 While the girls crossed the line we tried to find a place to park our boat but it was a little busy out there!

Finally, the time had come to relax and enjoy a beverage or two! Then, of course, it was off to the pub to have a debrief and celebrate with the rest of the competitors.

Paddling was a great experience and it was harder than I thought to guide the swimmers. I guess every year is different with the wind, current, swell and there will always be challenges.

Would I paddle again? I am not so sure but I am all fired up to swim in the event next year! Just need to work on getting my old teammates back in the water!

23 thoughts on “Paddling in the Rottnest Channel Swim”

Albany never disappoints.
We stepped back in time and learnt about Albany's Whaling history. In November 1978 Cheynes Beach Whaling Company put down their tools and simply walked away. This makes it an authentic experience.
Scoping out walks for our next Albany visit. The bibbulmun track passes by the Albany Wind Farm with stunning coastal views.
Nature and children are natural playmates; they're both wild and messy, unpredictable and beautiful. -Mark Hoelterhoff
We have been wandering the streets of Mt Barker checking out the painted door display. There are 100 doors that have been covered in artwork.
We are up in the clouds! Today we hiked to the top of Nancy's Peak at Porongorup National Park.